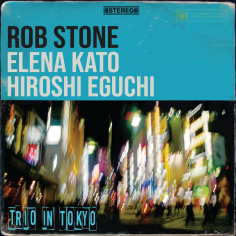 New album, "Trio in Tokyo," is slated for May 21, 2021 release
MEMPHIS, Tenn. - Tennsun -- Blue Heart Records is pleased to announce the signing of harmonicist and vocalist Rob Stone. Stone cut his musical teeth in Chicago with masters of the post-war electric blues sound and as a long-time member of Rock and Roll Hall of Fame drummer Sam Lay's international touring band. He went on to release several critically acclaimed albums as a bandleader, while continuing to perform and record with many of the genre's legendary artists––experiences that both shaped and inspired his musical trajectory. Stone is endorsed by Seydel Harmonicas.

For his fifth career release, Stone has taken a marked departure from the full-band electric blues tradition as he embraces the raw synergy of a stripped-down acoustic trio. Born of a musical collaboration developed over a dozen years of performing in Japan, what began as a project intended for exclusive Japanese release has transformed into a musically sentimental project that was enthusiastically embraced and encouraged by the late, great Big Jay McNeely. Trio in Tokyo, slated for May 21, 2021 release, showcases the fine musicianship of pianist Elena Kato and bassist Hiroshi Eguchi (Mavis Staples, Sugar Blue), and is a testament to the love and respect for blues music across cultures and around the world.

More on tennsun.com
"I have always enjoyed working with Rob when he has performed with Benny Turner, and have great respect for him as a musician and professional," says Sallie Bengtson, partner at Blue Heart Records. "We look forward to working with him on the global release of this very special project."

Stone says, "I'm thrilled that this album is being released with Blue Heart Records, and I look
forward to future opportunities to collaborate with musicians in the Blue Heart family, both
at home and internationally."

Album preorders will begin on April 30 with the release of the single, "Blow Fish Blow!"
For more information, visit www.robstone.com and follow him on Facebook and Instagram (@robstoneblues) for all the news.

Publicity and Promotion by Blind Raccoon.