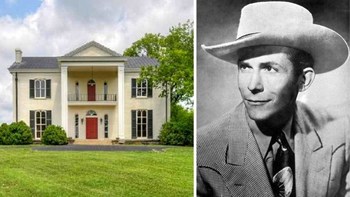 FRANKLIN, Tenn., Nov. 14, 2022 /PRNewswire/ -- Save Beechwood Hall Organization: A group of concerned Franklin, Tenn. citizens has united in a grassroots movement to save Beechwood Hall, one of the most significant historic homes in Tennessee. Beechwood Hall, now in imminent danger of being destroyed, was built in 1856 and is listed on the National Register of Historic Places.

The alliance of preservationists formed quickly after seeing "before and after" images of the iconic home, with demolition already in progress. In addition to the Pre-Civil War significance of Beechwood Hall, the home also holds important Tennessee and American music history, having once been owned by country music legend Hank Williams, Sr. and country music superstars Tim McGraw and Faith Hill.

Franklin, Tenn. is known nationally and internationally as a community with rich American history, including Carnton and Carter House, and the Civil War Battle of Franklin Battlefields.

The group that has formed to deal with this crisis, includes support from American Picker star Mike Wolfe and veteran historic preservationist Mary Pearce, former head of the county's Heritage Foundation.

More on tennsun.com
Please visit http://www.Savebeechwood.org to view before and after pictures and sign the Save Beechwood Hall petition. This "pop up" group of caring citizens respectfully requests like-minded friends and preservationists join the effort by leaving your suggestions in the comment section of the website.

Beechwood Hall was completed in 1856 by H.G.W. Mayberry and his wife. Contractors Byron and Jasper Lillie, who also built Old Town, another historic property in Williamson County, built Beechwood Hall, which withstood the Civil War.

In 1951, Hank Williams Sr. purchased the property. It was later owned by country music stars Tim McGraw and Faith Hill.

The home is a combination of Greek Revival and Italianate architecture with features such as floor-to-ceiling windows and a grand, open foyer displaying a freestanding spiral walnut staircase, according to the home's historical marker, erected by the Williamson County Historical Society.