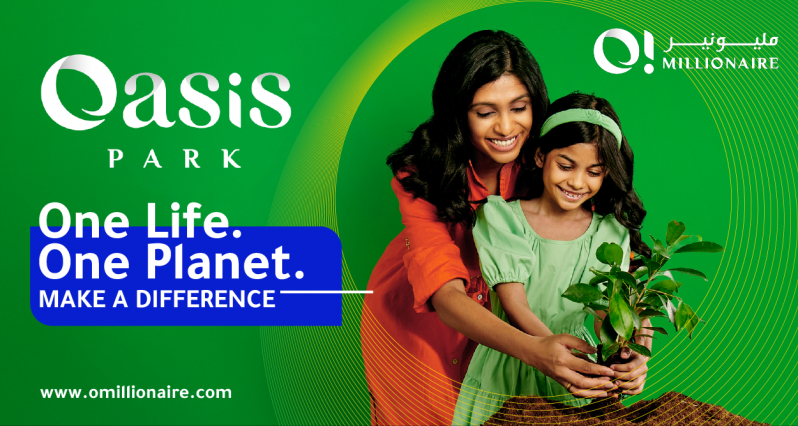 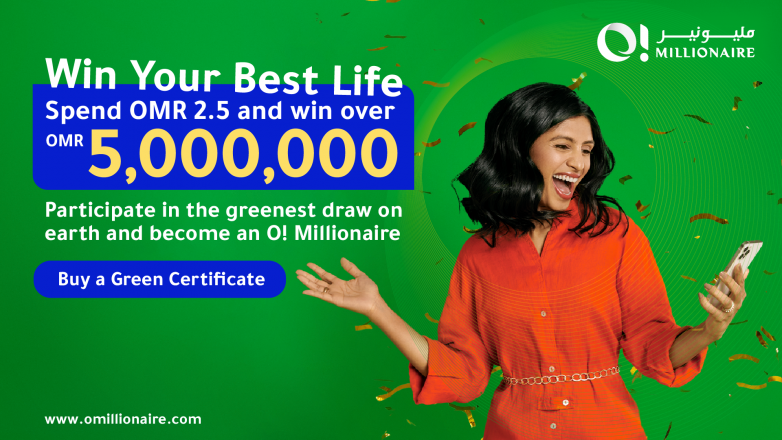 With an objective striving to give people hope, plant more environment-saving trees and make Oman more sustainable, the Middle East's Oasis Park remains focus of O! Millionaire's contribution efforts.
MUSCAT, Oman - Tennsun -- To promote Oman as a "modern natural sanctuary," Oasis Park is poised to become the Middle East's largest green park, initially planned to spread across an area of 18 square kilometers while playing host to hundreds of thousands of trees belonging to at least three dozen species and utilizing "air-to-water" technology – the process of converting water vapor in the air to actual water. The first phase of the park will achieve maturity within 18 months of launch, with the fully-realized Oasis Park, planned for a sprawling 1,200 square kilometers boasting 60 million trees, set to contribute to CO2 reduction by approximately 1,440,000 tons and a reduction of the total annual CO2 emissions by approximately 2.4 percent.

Into this foray has come Millionaire Investment LLC, in association with the Ministry of Agriculture, which has launched the O! Millionaire environmental initiative, its objective to give people hope, plant more environment-saving trees and make Oman more sustainable while simultaneously supporting the Oasis Park project. More recently, Millionaire Investment and representatives of the O! Millionaire initiative announced its Green Certificate ownership, representing Oman's first nationwide draw and which is already attracting locals, experts and participants from over 45 countries.

More on tennsun.com
Additionally, the grand prize will automatically increase by OMR 50,000 each week up to OMR 10,000,000 if it is not claimed by a winner; regardless, the grand prize begins again at OMR 5,000,000 once a winner or winners claim it.

O! Millionaire reps have also provided a one-of-a-kind opportunity for participants to "Double the Grand Prize", offering the chance of a lifetime never before seen in the Middle Eastern region. If the grand prize is valued at OMR 5,000,000, the winner has the chance to take home OMR 10,000,000 instead; further, with regard to the first two categories, there may be a chance that two or more winners will be claiming the grand prize and second prize, the prizes will be split between the winners.

Still, because O! Millionaire representatives believe all participants should feel a part of this "community," they will have the opportunity to "Secure the Grand Prize," enabling them to keep the winnings without splitting them with other winners.

"The purpose of O! Millionaire is to raise funds for the preservation of Oman's natural environment through an efficient, socially responsible and ethical tree-planting program," states Millionaire Investment LLC Chairman Ralph C. Martin. "Once the tree-planting program goes live, Oasis Park will be considered officially open. Indeed, Oman has been attempting to establish land suitable for agriculture development in line with its Vision 2040 initiative – part of its efforts to promote food security into the future – and we wish to contribute to these efforts being made via the Oasis Park project.

"O! Millionaire also aspires to generate thousands of jobs for nationals, contribute to the country's GPA, raise the 'happiness index' of the country, promote the unprecedented tree-planting program, reduce CO2 emissions, support ESG initiatives, and work with local and international affiliates. And to support tourism to promote Oman as a nation taking action against global warming."

More on tennsun.com
Through food-producing trees, fish and vertical or smart farming, and beekeeping, it is forecasted that the tree-planting initiative will establish food security for the future of Oman, with research indicating that trees could be planted which will reduce CO2 emissions – making the decision to plant new trees one of the most important amidst discussions concerning atmospheric carbon dioxide reduction and global warming limiting. Additionally, according to individuals involved in every aspect of this project, it will combine expertise in sustainable development, clean energy and organic food production for goals to be achieved.

"Our hope is that the people of this great country – and the rest of the world – are mobilized to be part of a greener, cleaner, cooler Oman that is both water and food secure," concludes Martin.

Oasis Park will balance deforestation numbers caused by urban development while offsetting CO2 emissions from the transport and industry sectors, all while enhancing the beauty of urban living spaces and creating greener living spaces. Though the park will represent a sustainable area in which people can connect with nature and their community, it will also be a hub for health-conscious visitors.

An Innovation Center for food security solutions, designed to create job opportunities for the future of Oman, along with a Sustainability Center focusing on education and engagement of the public – making it an ideal spot for school and family trips – tops off the planned Oasis Park experience.

Citizens and residents of Oman and the world are invited to become part of the O! Millionaire's Oasis Park community – from environmentalists and environmental enthusiasts to activists, volunteers and everyone in between – by reaching out to press@OasisPark.om.