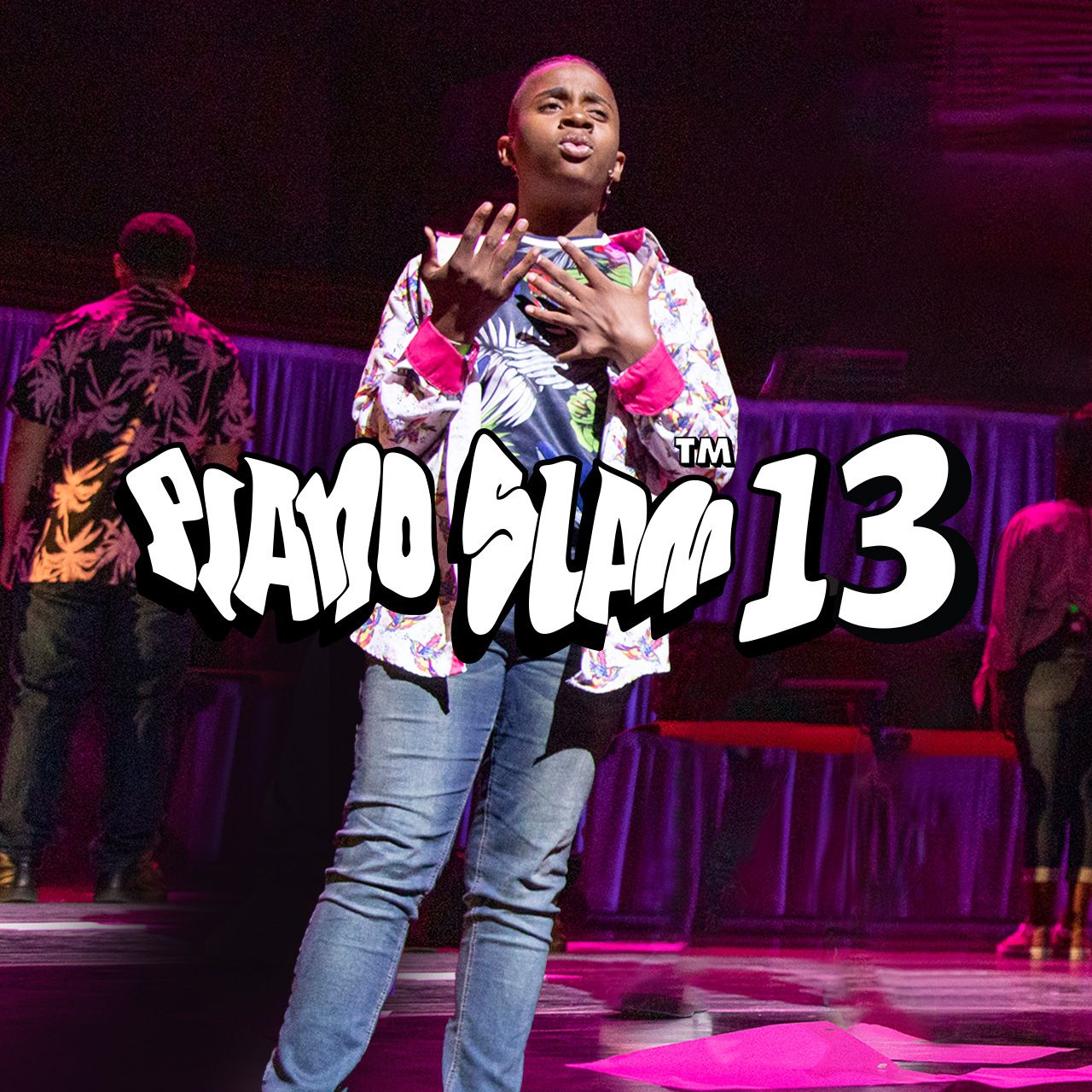 Miami's top teen poets showcased with international classical stars and DJs from quarantine at home, at the Adrienne Arsht Center, and all over the world.
MIAMI - Tennsun -- Media Contact:

Miami's top teen poets showcased with international classical stars and DJs from quarantine at home, at the Adrienne Arsht Center, and all over the world.

(Miami, May 3, 2021) – The Adrienne Arsht Center for the Performing Arts of Miami-Dade County and the Dranoff 2 Piano Foundation present the 13th anniversary edition of PIANO SLAM in a classical/hip-hop/spoken word mash up.

Recommended by The Miami Herald, "PIANO SLAM is a high-powered cross-genre music/poetry/dance extravaganza as a fantastically hip musical showcase for the voices of Miami's young poets in an extraordinary collaboration of top international and local artists."

The theme is based on Pulitzer Prize-winning composer William Bolcom's "RECUERDOS," commissioned by the Dranoff 2 Piano Foundation.  Miami-Dade Public School teens – poetry competition winners – write about the changes in their lives due to COVID-19 and quarantine, racial justice in Miami, and climate change. Keeping music in their lives has supported them through these changes.

Miami's top teen poets will perform from Covid quarantine in their homes. Through the magic of film they will be transported into the Miami performance of their dreams at the Adrienne Arsht Center, the Lyric Theater, PAMM, The Betsy Hotel on South Beach and parks and beaches all over Miami Dade County seeking to win the top performance prize of $1,000.

PIANO SLAM's wildly popular county-wide music-based poetry competition has worked with more than 90,000 Mami-Dade Public middle and high school students making classical music fun and an inspiration for their own creative writing. From Hialeah to the Beaches and Miami Gardens to Homestead, PIANO SLAM has been connecting teenagers' love of music to professional performance artists across creative boundaries for over a decade and is sponsored by Miami-Dade County, Miami-Dade Public Schools, Books & Books, The Children's Trust, the Miami HEAT, and the Adrienne Arsht Center.

More on tennsun.com
2021 marks thirteen years of PIANO SLAM bringing top international classical pianists to showcase the award-winning literary voices of Miami Dade Public School's top teen poets matching their Spoken Word with professional Classical and Hip-hop artists in a FREE concert at the Arsht. PIANO SLAM 13 is co-presented by the Dranoff 2 Piano Foundation and the Adrienne Arsht Center and premieres for free on Thursday, May 13th on the Adrienne Arsht Center YouTube Channel. Registration is required at: https://app.mobilecause.com/e/pjzoqQ?vid=ijr6j

TAIMA HERVAS is an Emmy award winning documentary producer/writer, a Director/Storyteller and non-profit Director focused on the environment, equity and empowering youth through education in the arts. Taima's talent is listening to people tell their own stories and making their stories come to life on film in ways that impact and inspire change for a better, shared future. Taima has produced independently for The Discovery Channel, PBS, National Geographic, TBS, and received the National Emmy Award for Outstanding Cultural Programming for Writing and Co-Producing Carrier Fortress at Sea, Discovery Channel Special

PIANO DUO DUOR Pianists Yoshie and Takashi have received numerous international awards since they formed a piano duo in Germany in 2004. Since then, DUOR has received high praise and achieved a devout following from their performances on more than 600 stages including concerts with/without orchestra, lectures, NHK-BS (TV), FM radio, in Japan and overseas. Their 6th album "GOLDBERG-VARIATIONEN fuer 2 KLAVIERE" released in 2016 was selected as the best album by the magazine "Record Geijutsu"as well as nominated for  the Record Academy Award for musical composition.

ANTHONY LAURENCIO from Afrobeta is a keyboardist, vocalist, songwriter and DJ for electronic-pop and funk duo Afrobeta. Touring some of the world's biggest stages including years playing with Mr. 305, Pitbull.

RUDI GOBLEN (writer, dancer, actor, and music producer) was commissioned by Miami Light Project to create the solo performances Insanity Isn't, Fair Welling, and PET. He is also known as an acclaimed B-Boy. Alongside his award-winning crew Flipside Kings, he has toured internationally, competing, adjudicating, and teaching.

ROGER ROBINSON is a British writer, musician, and performer living between England and Trinidad. His book "A Portable Paradise" won the prestigious T.S. Eliot Prize in 2019. He's the second writer of Caribbean heritage to win the prize – the highest value award in UK Poetry.

MICHELLE GRANT MURRAY is an independent choreographer, performer, Founder and Artistic Director of Olujimi Dance Collective, author of Beyond the Surface: An Inclusive American Dance History. She is  co-founder of the Florida Black Dance Artists Organization , Woodshed Dance Online Dance Platform as well as the founder and host for The Black Artist Talk, a conversation that dialogs the process, politics, and preservation of Black Artist in South. Michelle is also Associate Professor and Coordinator of Dance at Miami Dade College.

About the Dranoff 2 Piano Foundation

For 36 years, the Dranoff International 2 Piano Foundation has been the world's leading champion of exclusively two piano repertoire and artistry. It is the only international foundation, accredited by the World Federation of International Music Competitions, to discover, promote, and award honors to top professional duo piano artists through its competition, commissions, and presentations of duo piano concerts. The Dranoff promotes awareness in a new generation of students of the transformational power of music and the arts through its multi-disciplinary, educational, and inspirational concert program, PIANO SLAM.

Set in the heart of downtown Miami, the Adrienne Arsht Center for the Performing Arts of Miami-Dade County is committed to welcoming and connecting ALL people to the arts, to the Arsht Center and to each other. Our stages are alive year-round with artists from around the world, innovative programming from our resident companies and local arts partners, free community events that reflect Miami's unique identity and arts education experiences for thousands of Miami children each year.

Since opening in 2006, the Arsht Center, a 501C3 non-profit organization, has been recognized as a catalyst for billions of dollars in new development in the downtown area, a leader in programming that mirrors South Florida's diversity, a host venue for historic events and Miami's hub for arts education.

The Arsht Center is also a home stage for three resident companies — Florida Grand Opera, Miami City Ballet and New World Symphony — and a launch pad for local artists to make their mark on the international stage. Our 300+ events each year include the Center's Signature Series of classical, jazz, Broadway, local theater and much more. We present a robust series of touring Broadway musicals direct from New York, the largest jazz series in South Florida, a major annual Flamenco Festival and an award-winning Miami-based theater program. In addition, our Family Fest, Free Gospel Sundays, CommuniTEA LGBTQ+ celebration and Heritage Fest are among dozens of free events that bring together people from all corners of our community. For more information, visit arshtcenter.org.